The short reprieve in our humid summer weather has seen Lola Pug and me out and about in the neighbourhood, taking advantage of all of the friendly canine socialising that the more humane temperatures bring.

We were able to wander a bit further afield the other day, so I brought Lola to a park across the road from a friend’s house.

While sitting and waiting (otherwise known as “stalking”, if I must be honest), Trevor the Golden wandered into the park. Now, Lola Pug has a hate-on for most unknown Goldens, which baffles me, as her cousin and one of her friends from puppy hood are Goldens, so I expected fireworks from her.

Nope. Trevor was an instant love match for LP, and they sat together in mindful happiness for quite some time, watching the world go by.

Have I mentioned that Trevor is 15 years old? And he’s amazingly calm. A true gentleman. No wonder Lola fell in love with him instantly. (Oh, and his face isn’t weird – he was simply basking in a very bright sunbeam)

Now, back to that “stalking” thing.

I saw my friend’s door open, and it was the moment I had been waiting for. 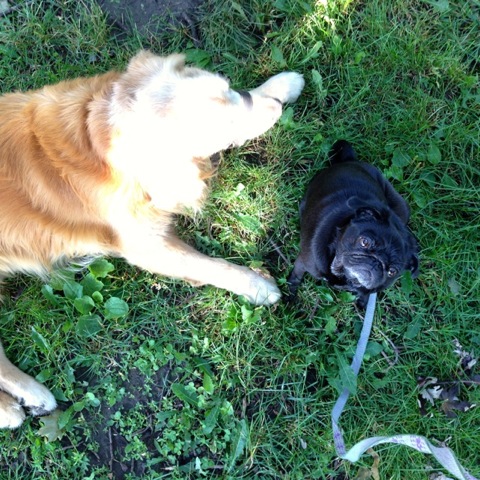 It’s time to leave the peace of your new oldest friend to go and get some PUPPY LOVE, babygirl!

At all of nine weeks old, this is our newest, and possibly cutest neighbour puppy….

Those EARS! Those BAGGY LEGS! Those Frenchie LIPS!

…but he soon changed his mind, and came in for a good nose gnaw.

The sour milk and beer smell of puppy breath is intoxicating to me.

Not so much for Lola Pug.

It was next to impossible to get a semi-decent photo of the two of them together, mostly due to the frenetic puppy-ness of one of the involved parties…

…but all frenetic things must eventually rest and recharge, and the littlest man eventually fell asleep in his new mama’s arms. 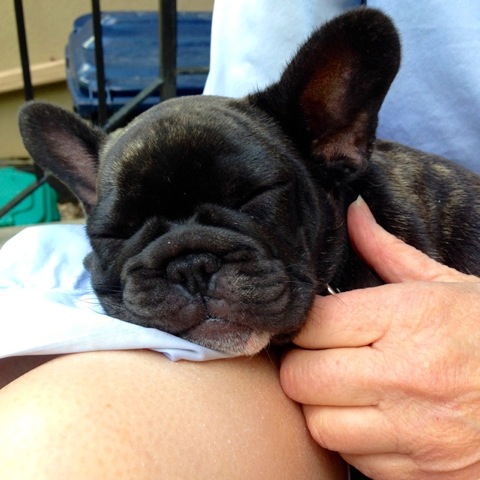 Alas, Trevor had left the park when we were done meeting and greeting our newest neighbour, so Lola didn’t get a chance to commiserate with him on the way home.

In time, perhaps Choco and Lola Pug will become better friends. Until then, he’s going to have a whole lot of neighbourhood love pouring down on his little self.

There’s nothing quite like some old friends and some new friends to make a weekend perfect.