Spring Has Not Sprung

Many lifetimes ago, when I lived out on the East Coast, I learned not to get too excited about the official arrival of Spring. Sure, the longer hours of daylight are something to celebrate (in a BIG way), but there was always some sort of sneak attack by Old Man Winter that you had to be on guard for. The last snowstorm in June was usually the point where you could really let your guard down.

This doesn’t, of course, mean that I appreciate the snow and sleet and general grey that’s happening outside right now, though.

The Pug knows what’s up out there, and she won’t even get out of bed anymore….

…but somehow, it happens.

And thank dog she’s only 14 pounds, because – yes – I do have to carry her limp, passively resistant self outside.

Time to pick up The Great Resisto and head outside. 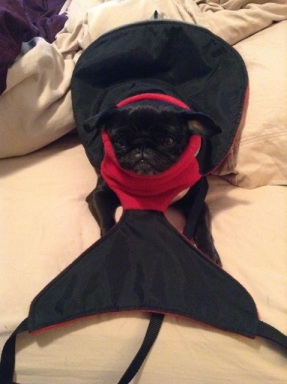 Lola’s passive protest reached new levels of limp today, and when we got outside, I could see why. It was crappier than I had even guessed. But, with some encouragement, the pees and poops were quick and efficient, and I think that I’m going to change Lola’s name to Gandhi. …but no hunger strikes, of course. She IS a pug, after all.

10 responses to “Spring Has Not Sprung”