Why Did The Pug Cross The Road?

…so where were we?

Up until this farm visit, the most intriguing thing about farms for Lola has been horse poop. Apparently, even to Princess Pugs, it is the most delectable smell (and taste – let’s not talk about that, please) on the planet.

…and her world was never the same again….

“Free Range” has nothing on this gal, let me tell you. Next time out, I’m getting there early enough to get some eggs, too.

But back to The Pug. Well. It took her a second to take in what she was seeing…

She made noises the likes of which I have never heard before.

The noises of a pug denied the hunt.

(I have a healthy respect for chickens, and I wasn’t about to let her torment this one. Especially since I suspected the chicken actually might be able to taker her on.) 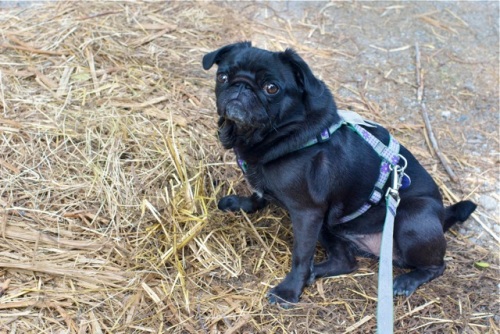 When it came time to leave, a certain someone wanted none of it.

First, I wouldn’t let her hunt chickens – the clear and core reason for her being put on this earth. Then, I insisted that we go HOME?

It took about three days of sulking before she got back to normal, and I still haven’t decided whether another chicken visit is a good idea, but something tells me I’m too much of a sucker for The Pug to deny her for long.

11 responses to “Why Did The Pug Cross The Road?”